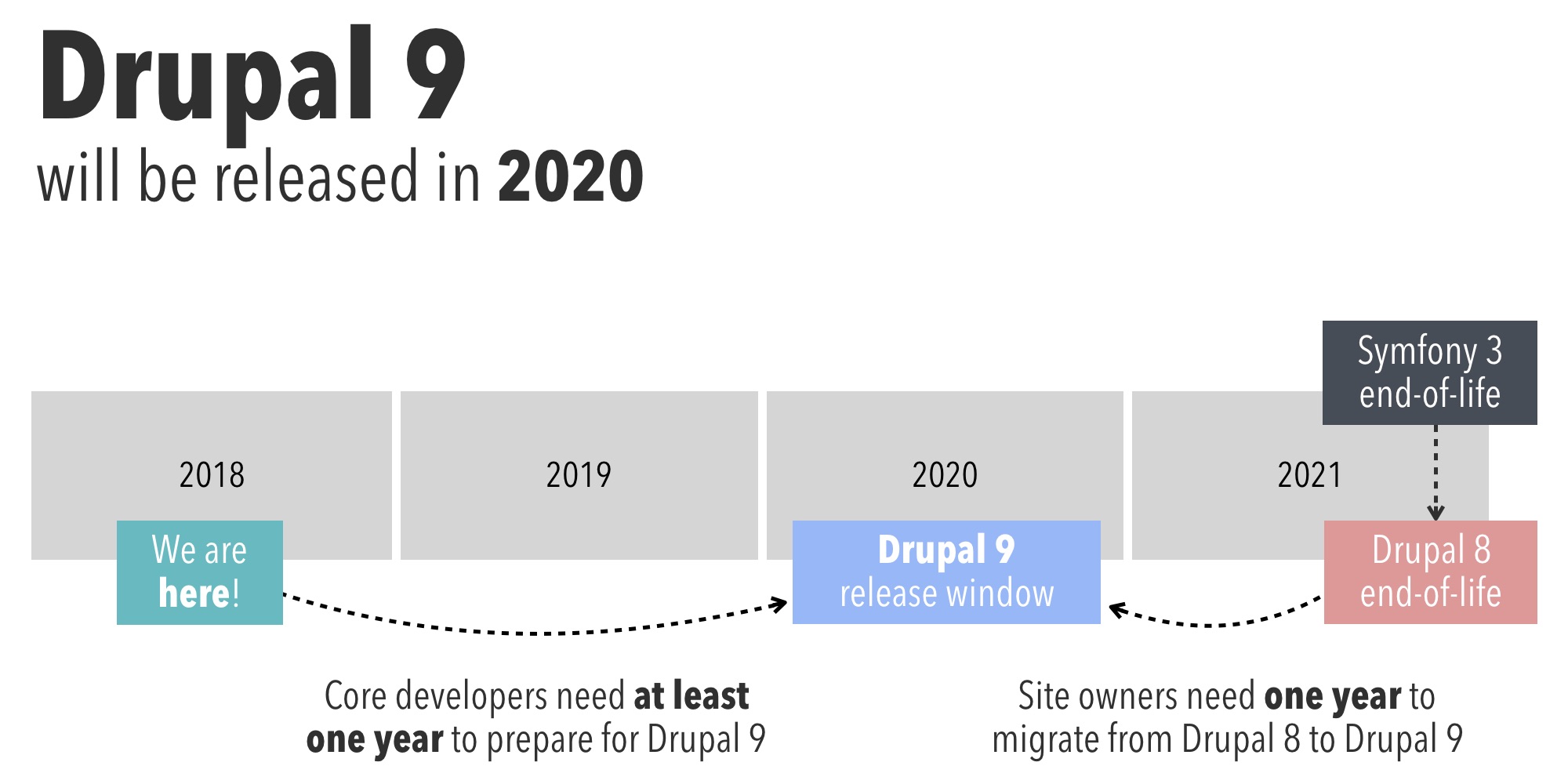 June 29, 2020: Drupal 7 end of life has been extended to November 2022 due to the covid-19 pandemic. For more details on this, please see our updates in our post, Extending Drupal 7's End of Life: What's a nonprofit to do now? An Update.

This week, Dries announced at DrupalEurope, and on his blog, that November 2021 will be the End of Life date for both Drupal 7 and Drupal 8. "End of Life" (EOL) means that a version is no longer supported by core maintainers with fixes, security releases, or enhancements.

Drupal 9 is now scheduled to be released in 2020, giving people a year to upgrade from version 8 to version 9, before Drupal 8's EOL.

Why is Being on a Supported Version Important?

Being on a version of Drupal that's "no longer supported" means that it will not be updated when new security vulnerabilities are discovered. Your site's data and infrastructure would be at a much higher risk of hacking than usual.

How Does this Affect Resource-constrained Nonprofits Using Drupal?

This is a new release model, and it’s really different.

Why is this Even Happening?

This is all about dependencies. Drupal 8's API is built on top of several other codebases. If Drupal is a LEGO set, its bricks include PHP, Symfony, Twig, and a few other frameworks. It’s extremely important to the Drupal community that Drupal core remains secure. That means that when these building blocks get deprecated, and are no longer supported by their communities with security releases, changes, and enhancements, then those bricks need to be upgraded in Drupal core so that Drupal core stays secure and functional.

Over the next year, Drupal Core maintainers will be going through the codebase to see what parts of Drupal’s API depend on bits of PHP, Symfony, Twig, etc. that will be changed or retired in the next releases of those systems. Just like we don’t want to have Drupal sites that the Drupal community no longer supports, Drupal doesn’t want to depend on a building block that is no longer being fixed and maintained.

When Drupal 9 is released, it will be the same as the latest Drupal 8 release, but it will no longer include any of those deprecated building blocks. Ostensibly, this means that if you’ve got a healthy, up-to-date Drupal 8 site, an upgrade to Drupal 9 will be fairly minor. It will be nothing like the radical changes that happened under the hood between Drupal 7 and 8.

For more in-depth information on all of this, please see this overview of the Drupal 7 and 8 EOL announcement, by the always-helpful Damien McKenna of Mediacurrent.

Is any of this set in stone? As Damien said in his disclaimer on that call, some of it is, but a lot of it is still in flux. That’s how web technology rolls. We can plan as best we can with the information we have, but we also have to do some waiting-and-seeing. But for the moment, there’s a lot of hope that this new release model will be manageable.

Once More, with Feeling

Is a Drupal site right for you, but your org is not swimming in gold bullion web development dollars? On Drupal 7 still? Continue working toward moving to D8, as soon as you can. When you choose contributed modules, stick to the Drupal Superhighway as much as you can. Once you’re on D8, keep your site up-to-date! As always, we promise to keep watching this space, and to share back what we learn. Stay tuned to nonprofit Drupal channels for news.

June 29, 2020: Drupal 7 end of life has been extended to November 2022 due to the covid-19 pandemic. For more details on this, please see our updates in our post, Extending Drupal 7's End of Life: What's a nonprofit to do now? An Update.