Myself and others at DevCollaborative recently adopted the project. We first issued Release Candidate 1 to quickly incorporate several fixes already reviewed and tested by the community. For Release Candidate 2, we took a step back to first define the vision and values of the project and gather feedback through usability tests. The result is a more reliable, accurate and easy to work with project.

In all we had fourteen contributors help us fix four bugs, roll out three features, and complete four tasks. Here's a look at the highlights. For a full list of the changes, see the Maxlength 2.0.0-RC2 Changelog.

This release of the Maxlength module contains several key bug fixes, including getting the "Bypass maxlength setting" working. So, if you have the administrator role, you will no longer see the character count text or have a maxlength imposed on you.

Important note: If you are administrator or in role with the "Bypass maxlength setting" permission you will no longer see the character count on text fields.

This throws people off and we think there's a better way to implement this permission. If you have opinions and interest in improving this, chime in on the Improve the Bypass Maxlength permission behavior issue.

In Maxlength 2.0.0-RC1 a nice feature was added which changed the font color to red when the character count goes into the negative numbers. Unfortunately the default red in CSS isn't accessible at the font size of the character count text. So, we updated that for a compatible red that's easy on the eyes.

If you ended your text with an unordered list interesting things happened. We'll spare you a screen recording of it. But rest assured, you can now end your text with a list without the WYSIWYG freaking out.

The most exciting part of this release is the usability improvements we made. Our usability tests consistently revealed that the help text, labels and settings in Maxlength were jargon-laden and difficult for site builders to understand. 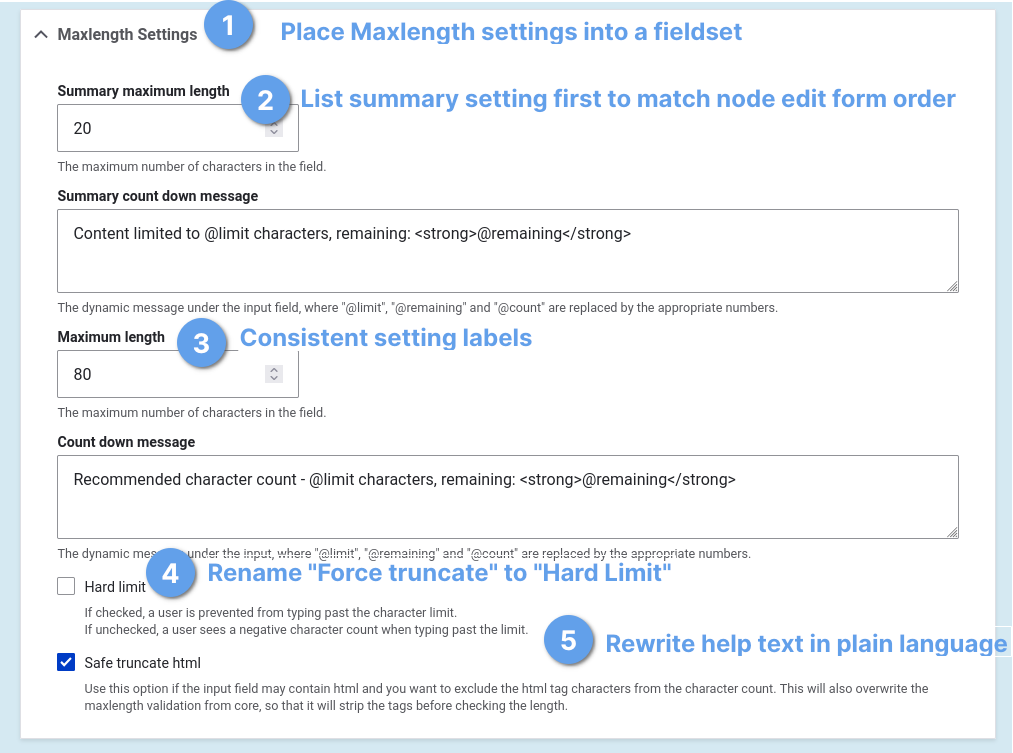 We've redesigned the configuration interface and improved the help text based on the usability testing feedback we gathered. We hope you like it! Let us know know one way or another on the Improve the user experience of configuring a Maxlength limit issue.

One Step Closer to a Stable Release

Now with RC2 behind us, our plan is for the next release to be a stable one. This is exciting as we'll qualify for Drupal Security Team coverage and be a more attractive option for people wanting the peace of mind of a stable release.

While we have a solid group of maintainers, we could definitely use help reaching the finish line.

Check out our roadmap to see what we're working on or email me at clayton@devcollaborative.com to get involved.

Once again, a  huge thank you to all the contributors who helped make this release happen -